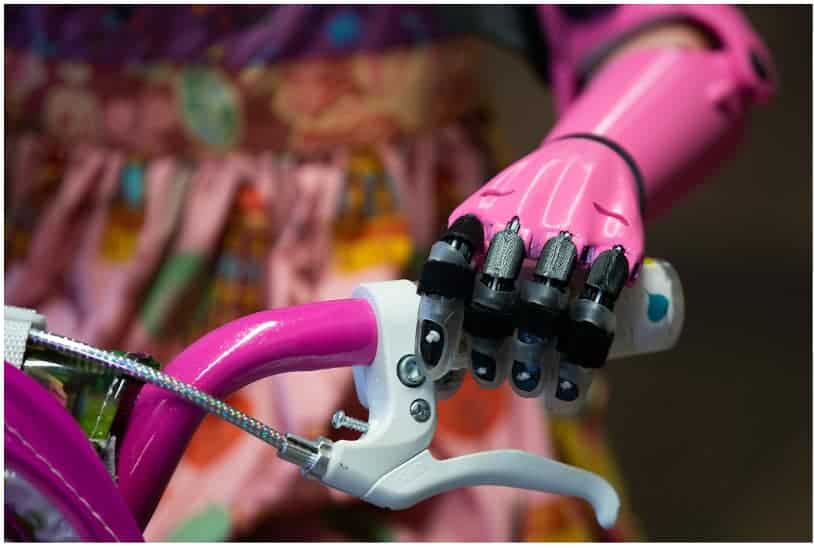 The Centers for Disease Control and Prevention (CDC) estimates that about 1,500 babies are born with upper-limb reductions every year in the U.S.1,2 In other parts of the world, such as Australia, Finland, and Canada reports indicate that 3.4 to 5.3 of 10,000 live-born children suffer upper-limb anomalies.3 In the United States, however, there are many more unreported cases due to the lack of a mandatory reporting system for birth defects and child amputees.

The use of digital design and additive manufacturing (also known as 3D printing) to create upper limb prostheses has inspired a significant number of 3D printing enthusiasts, students, healthcare professionals, researchers, and end-users. Currently, there are more than 60 different 3D printed prosthetic designs available online in different open-sourced databases. In the United States, several maker online communities and nonprofit organizations have provided open access to the digital files of these devices, including e-NABLE, Enable Community Foundation, Limbitless Solutions, Thingiverse, and Instructables. However, a large number of children with upper limb reductions express dissatisfaction with available prostheses.4-6 Some of the main factors that contribute to this discontent include difficulties controlling the prosthesis, high complexity of prostheses, and time-consuming fitting procedures.5,7,8 In addition, 35% to 58% of children with access to prostheses reject them due to excessive weight, lack of functional use, discomfort, and low visual appeal of the device.5,7-9

Recent technological advances in computer-aided design (CAD) programs and additive manufacturing,10 offer the unique possibility of designing and manufacturing upper-limb 3D printed prostheses that can be customized as the child grows. These devices are also low-cost, lightweight, and designed to be visually appealing for children, potentially encouraging use.10-12

The neural process underlying the acquisition of new motor skills using a prosthesis and the neuromuscular outcomes can have a profound impact on the development of alternative prosthetic rehabilitation approaches, such as the cross-education of motor function.13,14  Our preliminary data and previous literature suggested that the affected limb representation in the brain of children with congenital reductions may not properly develop within the motor cortex.

Children wearing upper-limb body-powered prostheses rely on socket forces and torques to gather information about the prosthesis and environment to perform activates of daily living.  Thus, it is conceivable that the representative adjacent areas to the missing hand, such as the residual limb or remnant area in contact with the socket for prosthesis users may have expanded and perhaps replaced those areas representing the missing parts of the upper-limbs increased brain activity in that particular region. These plastic changes15 are rapid and can take effect only after a few weeks of training.

Traditional neuroimaging techniques, such as functional magnetic resonance imaging (fMRI) and electroencephalography (EEG) currently used in the assessment of pediatric brain function require the participants to avoid large body movement for long periods of time.16-18  Furthermore, protocols including brain activation while performing motor tasks using traditional neuroimaging techniques such as fMRI and EEG present major challenges due to the increasing movement artifacts and the noise to signal ratio.19  Due to these methodological constrains the neural basis underlying motor performance in children has been severely understudied.16-18 Functional near-infrared spectroscopy (fNIRS) has emerged as a practical neuroimaging technique to assess hemodynamic cortical responses and cortical reorganization in young children.16-18 Because it delivers near-infrared lights via fiber optic cables, fNIRS is less sensitive to noise and movement artifacts than EEG, making it easier for children to tolerate and providing excellent spatial resolution.16-18 The use of a reliable neuroimaging technique in conjunction with a simple experimental design would provide a unique opportunity to quantitatively assess the influence of upper-limb prostheses in the neural activation patterns of the primary motor cortex and motor performance of children.

Our objective is to determine the influence of using a prosthesis on neuromuscular control parameters in children with unilateral congenital partial hand reductions. We propose that this new knowledge has the potential to inform the development of rehabilitation programs aimed at reducing prosthesis rejection and abandonment. The development of prostheses for children is complex due to their rapid physical growth and motor development. Children develop a wide variety of motor repertoires in the sensorimotor cortices of the brain. It has been generally accepted by clinicians that prosthesis use and early age fitting may help a child in their motor development. Additionally, it has been suggested that prosthesis use during daily activities may improve sensory and motor control development in children, thereby enhancing the potential development of motor repertoires. This idea is supported by brain imaging data suggesting that prolonged use of a prosthesis can recruit areas of the motor cortex normally devoted to other body representation.

The results of this study will provide unique information on the neural basis underlying motor performance in children with unilateral congenital upper limb reductions. The use of a reliable neuroimaging technique in conjunction with the implementation of a child-friendly 3D printed prosthesis will provide a unique opportunity to quantitatively assess the influence of upper-limb prostheses in the neural activation patterns of the primary motor cortex and motor performance of children.

Are you interested in participating in this cutting age research?

If you are interested in participating in this study please email: jmzuniga@unomaha.edu

This is a clinical trial funded by the National Institute of Health (NIH). To qualify for the study the participants need to be children from 3 to 18 years of age with a congenital upper limb reductions of the hand (partial hand) or arm (trans-radial). The participating child and a parent will visit our laboratory in Omaha, Nebraska in two occasions separated by an 8-weeks period. During the laboratory visits we will provide one of our prosthesis for the child to keep. Then the child will be asked to do several games, such as moving blocks as they wear a cap with sensors so we can measure their brain activity. We will also take several measurements of the arms.  During the 8-week period between visits, the child will be asked to perform several games to practice using the prosthesis. We will provide the prosthesis at no cost. Travel arrangements, transportation, and hotel accommodations from any domestic destination are covered. There is also a small stipend we provide for their participation in the study.

Dr. Jorge M. Zuniga received a Master of Science degree from the University of Nebraska at Omaha and a Ph.D. from the University of Nebraska-Lincoln. Currently, Dr. Zuniga is a faculty at the Department of biomechanics at the University of Nebraska at Omaha (UNO). He is the co-director of the Center for Biomechanical Rehabilitation and Manufacturing at UNO, a member of The Association of Children’s Prosthetic-Orthotic Clinics. Dr. Zuniga’s main research interests include the development of low-cost 3D printed prostheses and 3D printed anatomical models for surgical planning. Dr. Zuniga has been awarded several grants from NASA, The National Institute of Health, and several industry grants. Dr. Zuniga has authored and co-authored over 80 manuscripts published in peer-reviewed scientific journals. Dr. Zuniga developed a 3D printed prosthetic hand for children named Cyborg Beast. The Cyborg Beast was named one of the best 5 inventions of 2014 by MSN.com.

Dr. Zuniga’s active international collaboration and scholarly productivity led to his nomination as the 2018 “Runner Up” for the  APEC (Asia-Pacific Economic Cooperation) Science Prize for Innovation, Research and Education (“ASPIRE”) given by the U.S. Department of State.

Interview: Dr. Nick Dechev, Associate Professor in the Faculty of Engineering, and is presently Director of the Biomedical Engineering Program

Bespoke Bodies: Boston Learns About the Design of Prosthetics