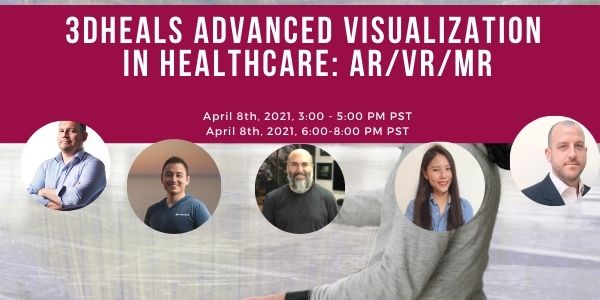 True breakthrough or social media sensation? We will do a deep dive into how the latest technological advancements in advanced visualization, augmented reality, virtual reality, mixed reality (AR/VR/MR) are changing the way we interact and potentially improve healthcare. We will invite several field experts, entrepreneurs, and researchers to explore together. The live webinar is free to everyone, and on-demand recording will be available to 3DHEALS premium and enterprise members.

Peter Intro to Panelists / Self

Jesse Courtier – Intro to VR/AR past versus present practices / Siramedical

Star is a Ph.D. candidate in the Department of Mechanical Engineering at the Johns Hopkins University. She is concurrently teaching a course, Human-Robot Interaction, in the Department of Computer Science. Her research expertise is human-computer interaction, especially for medical and virtual/augmented reality applications. At her current advisor’s, Dr. Axel Krieger, lab, she joined a project on creating patient-specific vascular grafts that are hemodynamically evaluated through computational fluid dynamics simulations and biodegradable. Thinking from the doctors’ perspectives, she thought creating software that provides features to perform complicated tasks and calculations that requires deep engineering knowledge could bolster diagnostic accuracies and preoperative planning. Her proposed idea has extensively been explored and developed as her Ph.D. dissertation topic, and it also became the foundation of her startup, Corfix Medical – a medical technology company specializing in cardiac surgical simulations and optimization.

Ed has over 30 years of experience starting, building and investing in successful start-ups. Ed currently serves as the CEO of Thyng, an Augmented Reality company focused on developing the next generation of healthcare solutions using advanced 3D visualization technologies.

Prior to Thyng, Ed founded, financed, and sold a number of startups, including: (1.) VREAM, Inc. – founded in 1991 establishing a new industry for Virtual Reality on the PC. VREAM won the PC Magazine Editor’s Choice Award in November 1996, and was named the 4th most popular download on the web by Wired Magazine in May 1996. VREAM was bundled with early retail versions of Microsoft Internet Explorer and Netscape Navigator. VREAM raised its first round of Venture Funding in 1995, and was acquired by Platinum Technology in 1996; (2.) BeautyJungle, Inc. – raised $23 Million to build the largest online Beauty Retailer to date with 10,000 products and over 100 employees. BeautyJungle was named by Fortune Magazine in 2000 as the 4th best e-commerce site on the web, right behind Amazon at #3; (3.) MainCloud LLC – one of the first cloud computing platforms allowing users to store, view, and share all of the content in their digital world;

Dr. Jesse Courtier is an Associate Professor of Pediatric Radiology at the UCSF Benioff Children’s Hospital and co-Founder of Sira Medical, a startup focusing on the application of Augmented Reality for improved medical education, training, and pre-surgical planning. He co-developed the initial versions of the Sira application for the Microsoft Hololens and Apple iOS after seeing the challenging disconnect between medical imaging and surgery, subsequently being awarded the UCSF Innovation Ventures Catalyst Award. Dr Courtier is a multi-award winning educator, and physician leader. His interests lie in use of advanced imaging technology for medical education and improved patient care

Keita’s passion lies at the intersection of emerging technologies, digital arts, and economics. He graduated from UC San Diego with a B.S. in Management Science (Quantitative Economics) and a minor in Visual Arts Digital Media. He co-founded Nanome in 2015 and now leads company operations.

Nanome enables expert scientists, students, and hobbyists to design and simulate molecules in Virtual Reality. Nanome is the next step in computational/medicinal chemistry, structural biology, and beyond.

Currently the North American Channel Director at Roboze, a high-end 3D printer manufacturer who is re-shaping the manufacturing industry and revolutionizing the world of 3D Printing with the most precise technology, capable of processing super polymers and composite materials for the realization of finished functional parts to be used in the most extreme conditions.  Having also held a number of senior leadership positions in sales, technology and operations, in both public and private environments, with a passion for leadership, presenting, training and consulting on 3D printing, virtual reality, laser scanning, lean manufacturing and document management software and processes.

The Augmented Mind: How AR/VR will empower 3D Printing technology in bettering the real world.